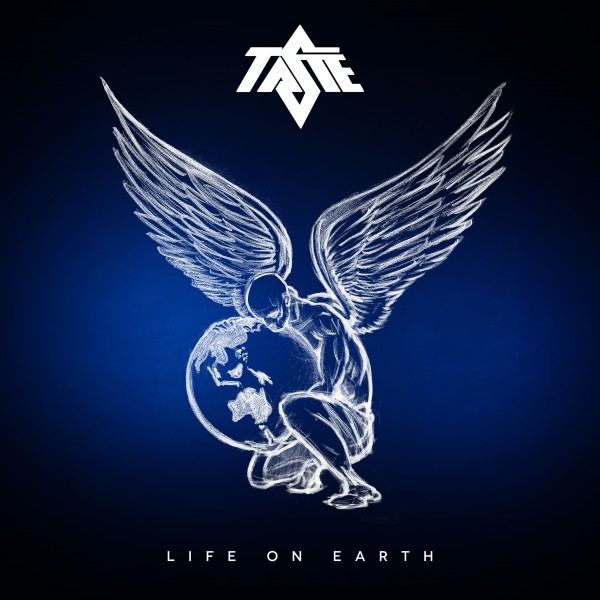 “The explosive vocals, stark guitar harmonies and head-banging solos are all informed by the band’s combined experience in the hard rock and jazz worlds.” (Music Injection, 6/4/16)

A clock ticks. A car alarm splits the night. A distant belltower tolls as a gun is ominously cocked in your ear. The curtain rises in a grand cinematic flourish of muscular, orchestrated rock. Drums roll and crash as the synth riff soars and the first exhilarating guitar solo tears a hole in the sky. Who makes records like this anymore?  The story of TASTE is a legend from the lost back pages of Australian rock’n’roll: the meteoric rise and fall of a mid ’70s glam-rock quartet with a fiery reputation among such lofty peers as AC/DC, Queen, Suzi Quatro and the Sweet. But history can wait.  Fast forward 40 years and LIFE ON EARTH is a document of rare craft and experience from a band split by circumstance all those years ago, now reunited with newfound passion and decades of combined expertise from the realms of hard, progressive rock to the frontiers of jazz.

“I put a couple of songs down in my home studio,” explains singer and keyboard player Ken Murdoch, “and one sounded very TASTE-like: very heavy and theatrical so I sent it to Joey and Michael and said ‘What do you think?'”

The answer was unanimous. A sign of the creative explosion that ensued, that track never made the final cut. “The songs poured out of me,” says Ken. “It took a few months to write but I knew where it was going. A few of the tracks I got from short stories that I wrote. Every song seemed to link to the last.  “It certainly has a theme. It deals with a lot of history and it deals with what a turbulent world we live in,” he says. “Even with the ballads, there’s not really a love song connotation. It keeps falling back on history as an example. It’s a big album.”

That’s a fair call for an epic suite that spans the melodic metal thunder of “I Am God” to a tender ballad of mortality titled “Is It Just a Dream”. The rage of “Fatal Shore” was inspired by horrific events in modern Australian society, while “Blood” brings it closer to home with a glam-tinted celebration of the ties that secure friendship against the odds of time.  Ken, Joey, Michael and drummer Virgil Donati were teenaged rock idols back in the Countdown dreamtime of the mid 1970s. Tickle Your Fancy and Knights of Love were two classic albums (recently remastered for iTunes) that spawned a run of hits including Tickle Your Fancy, A Little Romance and their signature tune, Boys Will Be Boys.

The latter was famously adopted by Queen as the pre-gig fanfare on their A Night At the Opera tour of 1976. TASTE was preparing to tour America with Freddie Mercury and Co. on the back of an imminent deal with Sire Records in the USA when the wheels fell off in 1977.  It was a tragic tale of mismanagement and parental control that any member of the band will philosophically recall—along with other classic yarns about kidnapping Malcolm Young, touring with Skyhooks and Sherbet and any amount of affiliated youthful hi-jinx.

What matters, though, is what remains.  “As teenagers, we took ourselves very seriously as musicians,” says Michael, best known in recent times as a jazz bassist, owner of Bennetts Lane Jazz Club and artistic director of the Melbourne International Jazz Festival.  “When I listen to [the ’70s] albums now my mind boggles at how we actually wrote those songs at that age, with that quality of musicianship. There’s a lot of virtuosic playing. It’s of the time but it’s progressive. It was real. It was organic and full of integrity.”

Speaking of virtuosity, new TASTE drummer Damian Corniola boasts a fortuitous connection with the roots of the band. He studied under original drummer Virgil Donati, these days based in LA and widely considered one of the best in the world (ask anyone from Southern Sons to Dream Theater).  “To find somebody who has his capabilities, so young, is incredible for us,” says Ken. “Plus he’s a TASTE fan. That’s really the thing that got us. He knows all the songs because I guess Virgil played them for him  “The first thing I said to him was ‘Why would you want to join us?’ And he said ‘Because this is like a dream’.”

The feeling is sort of mutual. LIFE ON EARTH is an album for our times but steeped in the wide-screen colours of a more progressive era. Real strings. Layers of percussion. Walls of harmony. Crafted segues, dramatic timing shifts and a vast, unified vision that befits the grandeur of its title.

“We didn’t do anything by halves this time,” Ken says with a laugh. “It’s going to be interesting to play live.”

LIFE ON EARTH is out on iTunes May 27.  The CD album is available here at the GoSet Music Store from June 17.